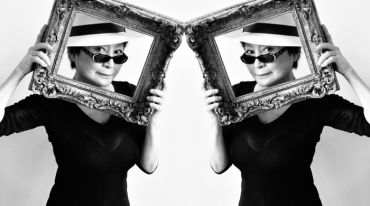 At the Guggenheim Museum held a retrospective of the unique one of the brightest and most influential artists of our time-avangardistok Yoko Ono, who is also known as the widow of the legendary band members "The Beatles" - John Lennon.

The exhibition includes about two hundred amazing work performed for more than 60 years of creative work since 1950.

Here you will see unusual installations, photographs, text, graphics, audio and video works, as well as a new version of Performance Moving Mountains.

Work by the Japanese artist filled keen sense of humor, they present social criticism and felt concentration on important topics such as trust, balance, unity.

Exhibition "Yoko Ono. Half-A-Wind Show" will be held from March 14 to September 1, 2014 in the Spanish city of Bilbao.

Feedback
Your attention and time spent on the site IGotoWorld.com is greatly appreciated. If you have any questions, wishes, complaints, or you desire to learn more about us, select the area you are interested in and click the link to make a comment or ask a question.
Feedback form
Request submitted successfully.
Send