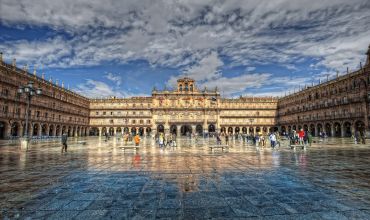 One of the most popular attractions in the Spanish city of Salamanca - is the Plaza Mayor (translated from Spanish means "Main Square").

From time immemorial there has hosted bullfights, presently held ceremonies and concerts. Area is surrounded by three-storey building on it may be about 20 thousand people.

Picturesque City Hall, located on the square, decorated with four symbolic figures. They represent justice, prudence, temperance and strength. Many sculptures of historical figures surround and the Royal Pavilion.

Plaza Mayor in Salamanca considered the most beautiful square in Spain. It is called the heart of the city, after all significant events held here. It's always a crowded place. Especially beautiful here in the evenings, when the square is lit many fires.

Feedback
Your attention and time spent on the site IGotoWorld.com is greatly appreciated. If you have any questions, wishes, complaints, or you desire to learn more about us, select the area you are interested in and click the link to make a comment or ask a question.
Feedback form
Request submitted successfully.
Send